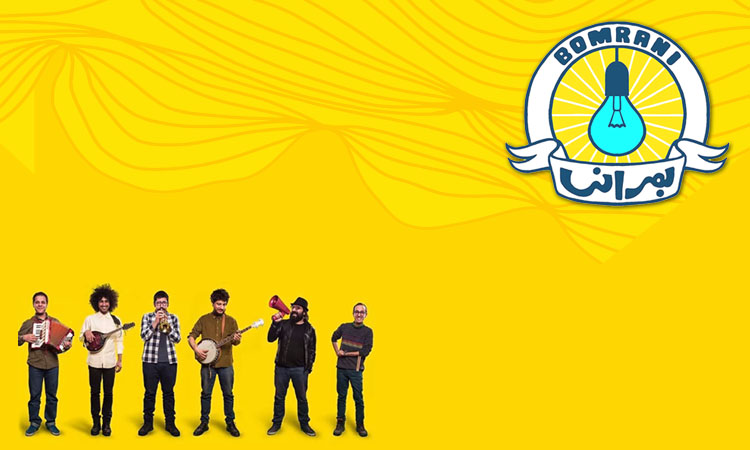 The Bomrani trio gave several experimental performances in smaller venues before Arash Omrani (Keyboards, Piano, Accordion), Kiarash Omrani (Bass Guitar, Double Bass, Banjo) and Abtin Yaghmaeian (Drums) joined them. The songs they wrote before 2011 were collected in Naked Socks. After performing in various charity shows in 2012, they gradually started to gain momentum and were recognized by various cultural circles, which led to several collaborations with Iranian reputable theater directors. They were cherished as the most hard-working band in theater music in 2012 by the public relations of the prestigious City Theater of Tehran. In 2012, they were commissioned by Chekeh Records to make a children’s album. The favorite Red Bus was the result, released on June 2014.
In 2014, which marked their first appearance on Iranian National TV, the band started recording its first official studio album Common Vent, released on May, 2015. Bomrani performed Common Vent in Azadi Concert Hall in eight nights in the summer of 2015. Shortly after that, they started writing material for their next album, Leaving and Passing By, released in early 2017. This album received considerable attention shortly followed by successful concerts in the same year. Since 2016, the band started giving numerous successful performances across Europe.
In 2015 the Drummer has left the band and Salar Asghari replaced him.
They worked on an Experimental album afterwards working on alternative Iranian songs from 50 years ago, reproducing them, and they released “1340” based on that, also they had multiple gigs and four more festivals to participate in, following up their international activities, including 4 tours in Europe, playing in 15+ different cities across Europe, and important festivals like 27th intl. Jazz Festival in Russia, CopaCobana in Belgium, Gentse Feesten in Belgium and Simsalaboom in Germany.
After Covid happened they release an album named “Probably There Is No Hero” and participated in one the most popular TV Shows in Iran called “Hamrefigh”.
They Currently having a tour in Europe, Performing in +10 different cities, with a guest Drummer(the drummer couldn’t leave Iran due to Military Services) named Farid Farzianpour.