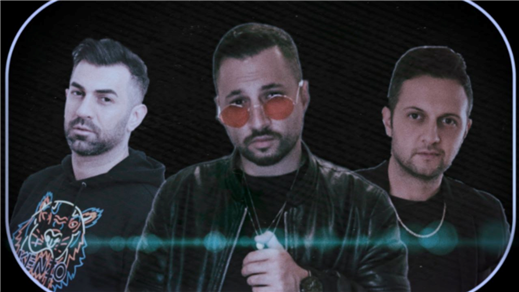 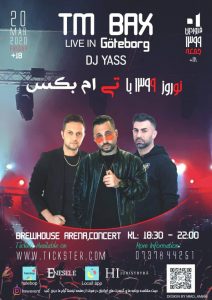 In January 2007 few friends gathered in a small studio in Copenhagen. They all had the same ambition to make a change in Persian Music.
They all grew up with the Persian culture and music, even though they are far away from Iran. The obvious choice was that the music had to be Persian, but with a twist of their own. They did not believe in limiting their music. They thought there was nothing wrong with combining American or Arabic style with Persian music. Music is expression of an artist and can be expressed as the artist wants to. With these thoughts they created a new genre/style in Persian music.
In 2007 they released 2 giant hits “Dokhtar Bandari” and “Khanoom Bebakhshid”. With these hits, the success of the 3 young men with a big passion for music began. In 2008 TM BAX started to perform at big concerts all across the world and gained a lot of experience.
After a while they managed to move to a bigger studio which they called Voodoo Records. TM Bax has lots of plans for the new company.
TM comes from the Persian word “Timarestan” which means mental hospital. They came up with the name one day at the studio. They had stayed there 2 days without sleeping so they were very tired and started to act like crazy people. The entire studio was massed up and looked like a mental hospital. Being so crazy about creating music and staying in the studio is a part of the name and might also be the key to their success.
Members of TM BAX:
Alibi: Rapper/Singer/Producer, born in 1988 in Copenhagen
Nabilety: Rapper/Singer/Producer, born in 1984 in Tehran
Shahin Loo: Rapper, born in 1983 in Tehran